CIPN causes tingling, discomfort, and numbness in the hands and feet, among other symptoms. These symptoms can make it difficult to do things like typing or dressing, decrease balance, and raise the risk of falls and hospitalizations. They may also be a reason to lessen or stop chemotherapy. Clinical trials and investigations have been done to learn more about the symptoms, aetiology, pathophysiology, diagnosis, risk factors, and therapies of CIPN.

Although the prevalence of CIPN symptoms is highest in the first month following the conclusion of chemotherapy, many patients continue to experience CIPN symptoms six months later. Acute neuropathy is caused by paclitaxel and oxaliplatin, two of the six principal antineoplastic drugs that produce CIPN. It appears during or shortly after therapy infusion. The other four categories of drugs are known to cause late effects that appear weeks after treatment is finished.

CIPN can develop during chemotherapy or several months after treatment, and symptoms can last for a long time afterward. The impact of CIPN and accompanying symptoms on a patient's quality of life is severe. Other comorbidities and a high financial burden are also linked to CIPN. According to one study, 83.6 % of people had CIPN, with the majority of individuals having mild to moderate peripheral neuropathy. The prevalence rate of CIPN varies between 20% and 90%. Several factors, including the study population, period of follow-up, treatment regimen, and assessment methods utilized, may have influenced the large range. There is a scarcity of evidence on demographics and clinical features that raise the risk of developing CIPN. Risk factors for CIPN were not examined or proved to influence the prevalence and severity of CIPN in most registry studies. Older age, prior or contemporaneous therapy with a neurotoxic medication, and lower creatinine clearance were all found as risk factors for the development of CIPN in research conducted by the Southwest Oncology Group.

There are various emerging drugs for CIPN, out of which Tetrodotoxin (WEX Pharmaceuticals) is in Phase III clinical trials, whereas Ibudilast (MediciNova) is in Phase II trials. MN-166 (ibudilast) is a small molecule macrophage migration inhibitory factor (MIF) inhibitor and phosphodiesterase (PDE) -4 and -10 inhibitor that reduces pro-inflammatory cytokines while promoting neurotrophic factors. APX 3330 (Apexian Pharmaceuticals) is in Phase I clinical trials for chemotherapy-induced peripheral neuropathy, and AM 1710 (MakScientific) is still in the preclinical stage of research. PledOx (calmangafodipir), a "first-in-class" therapeutic candidate developed by Egetis Therapeutics, is aimed to prevent nerve damage induced by chemotherapy without diminishing its anticancer effects. However, in the second quarter of 2020, the phase III program was abruptly terminated. CIPN is now being studied in phase 1b trials as well as double-blind, placebo-controlled, randomized phase II trials. The results of these investigations will help to guide future research into the potential of inhibiting uptake transporters as a preventative strategy for reducing the development, incidence, and severity of CIPN.

The report provides a thorough analysis of market opportunities in the worldwide CIPN Market. The 7MM region consisting of the following countries have been extensively analyzed – U.S., UK, France, Germany, Spain, Italy, and Japan – for growth opportunities in the CIPN market.

The report identifies the U.S. as the largest market with a US$ 544.15 Mn market size in 2021 while the Spain market has been estimated to grow with the highest CAGR of 5.7%. Previous research has primarily focused on specific chemotherapeutic drugs, with CIPN incidence rates ranging from 19 % to over 85 %. In the United Kingdom, 165,544 patients survive cancer each year, compared to more than 1 million in the United States, increasing the risk of CIPN. In patients with multiple myeloma, CIPN is frequently overlooked. This can be explained in part by the fact that at baseline, up to 54% of treatment-naive patients had clinical indications of peripheral neuropathy or had aberrant neurophysiological results. Global Peripheral Neuropathy Market is estimated to grow at a CAGR of 3.4% during 2021-2027. Furthermore, bortezomib is frequently used in combination with other neurotoxic medicines, such as thalidomide, which has a different mechanism of neurotoxicity. As a result, combining bortezomib with other therapies may result in CIPN due to various pathophysiological pathways.

The report includes global CIPN market analysis on basis of therapies being used to treat or decrease the progression of CIPN disease. Medications, surgery, transcutaneous electrical nerve stimulation are some of the methods of treatment or prevention of CIPN of which medications are dominating the market share in 2021. Duloxetine is the primary medicine currently indicated for treating established CIPN as of 2020. Duloxetine reduces CIPN pain and other CIPN symptoms, according to data from numerous clinical trials. It does not, however, completely eradicate CIPN symptoms, and it can cause unpleasant side effects such as dizziness, dry mouth, constipation, and diarrhoea. The Food and Drug Administration has not approved it for the treatment of CIPN. However, stretching, walking, resistance training, balance exercises, yoga, and meditation are some of the promising and safe behavioral therapies for CIPN that have been reported to be useful based on randomized clinical trials. According to a report, thalidomide treatment was associated with a higher proportion of myeloma cancer patients with a sensory CIPN compared to no thalidomide treatment.

The industry has seen enormous growth as a result of factors such as the world's rising cancer prevalence and the development of new therapies, which are likely to propel market growth even further. The evidence is mounting that the path to neuropathy varies depending on the agent. With a better understanding of how these drugs affect the peripheral nervous system, more personalized treatments can be devised, allowing for improved treatment and avoidance of long-term harmful consequences. The CIPN Market will eventually increase as a result of this. In the United States, 1,806,590 new instances of cancer are expected to be diagnosed in 2020, with 606,520 individuals dying as a result of the disease. Patients with nervous system cancers, including brain tumors, spine tumors, and skull base tumors, are more prone to develop peripheral neuropathy as a result of the tumor’s nerve damage. 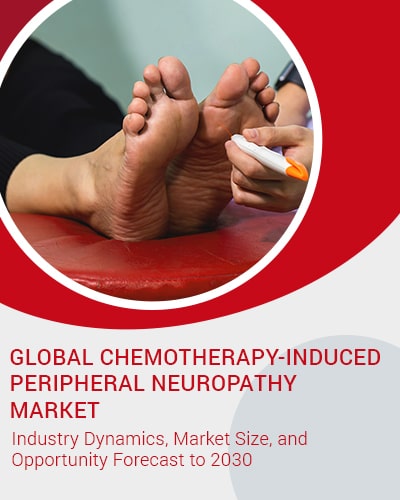